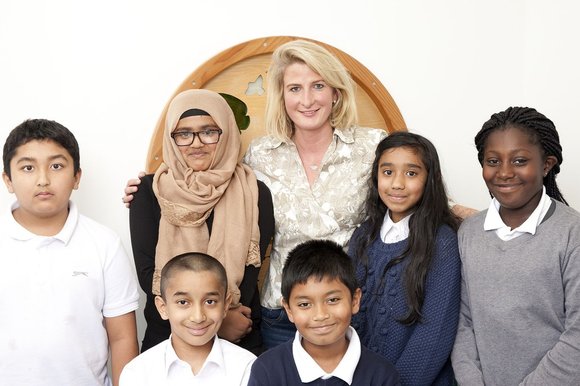 Financial education has been added to the curriculum. To find out how it will help youngsters, we met pioneering pupils

AYESHAH, 11, looks at me intently. I have just asked what she and her classmates would do if somebody gave them a lot of money, and I am expecting excited talk of shopping sprees and trips to Disneyland.

“I’d be very suspicious of why a stranger had given me lots of money,” she says solemnly, having given the question careful consideration.

Raiyan, 10, agrees. “If somebody ran–dom gave me money, I’d hand it into the police,” he says. “But if it was from my job, like a bonus, then I’d give half to charity and the rest I’d spend on a house and a car.”

One of his friends would also buy a house and a car, but earmarks part of any potential windfall for a different purpose. “If anyone tries to get me, I’d pay them off,” he says earnestly.

The children are year six pupils at Culloden Primary School in Tower Hamlets, east London, and they all have clear priorities when it comes to finance.

I have come to talk to them and some of their classmates, who are in their final year of primary school and aged 10 or 11, about the personal finance education they receive at school, and whether money matters are discussed at home.

Personal finance was added to the national curriculum for both primary and secondary schools last month, but Culloden is ahead of the game. The pupils have been taught about money for several years.

The school is in one of the poorest areas of the capital, a stone’s throw from Balfron Tower, a 1960s residential block that has been described as the ugliest building in London. More than 95% of the 579 pupils at Culloden are from ethnic minorities, said the principal, Ben Carter, with a large majority of Bangladeshi heritage. English is not the first language for nearly 90% of them.

Pascale Van Wynsberge, 52, a teacher and interim mathematics manager at the school, said: “In the early years, we used a lot of role play to teach the children about money. We try to bring money matters into virtually all the different lessons.”

The children tell me that in history they learnt how shells and stones were the first forms of currency; in geography, how different countries use different notes and coins; and, in maths, they learnt how to budget by planning a wedding, using the internet to find out the cost of everything they needed.

The school is set to be declared a “centre of excellence” for personal finance education, having participated in a national programme run by Personal Finance Education Group, a charity, and the information services company Experian.

The programme offers free expert advice and support for teachers in dis–advantaged areas, where financial education is likely to have the biggest impact on the prospects of school-leavers.

James Jones, head of consumer affairs at Experian, said: “The response and enthusiasm of both the pupils and volunteers is amazing. You can see that the pupils are learning a huge amount, but without necessarily knowing they are learning.”

It is impressive just how much financial knowledge the children have already, although Carter admits that the girls and boys I’m meeting are all in the top set for maths. They have grasped the concept of earning interest on their savings — although compound interest is a step too far just yet — and understand that when somebody borrows money, they have to pay back what they owe.

As part of a generation that already spends a great deal of time online, they know plenty of other things that will also prove invaluable.

“If you’re on a website and buy something using a credit card, and then you find out it is a scam and you don’t get what you’ve ordered, the bank will give you your money back,” explains Rizwana, 10.

None of the children has shopped online using a parent’s card, although 10 is the average age for starting to purchase items via the net, according to research by the Personal Finance Education Group.

Although credit cards do indeed offer the protection Rizwana describes, the children are well aware of the dangers of using money that is not their own. “If you take money from the bank and you don’t pay it back, what would you do if they sued you?” asked Raiyan.

They say there is little talk about financial matters at home, although Tahmid, 10, who wants to be an engineer, has been told about the American investment guru Warren Buffett by his dad, a taxi driver.

All of the children receive pocket money, usually in return for completing chores. Rizwana says she saves £1 a week towards college or university costs, while Angelica, 10, “sometimes saves and sometimes buys sweets” with the £1 or £2 a week she is given.

Only Raiyan confesses that he is “not a good saver”, although he says he does try to keep some of his pocket money in his cupboard rather than in his pocket. Tariq, 10, keeps his money under his bed. Only Ayeshah has her own bank account, opened with HSBC.

It is inspiring to see how engaged the Culloden children are in learning about money, and they are unanimous about how vital personal finance education is. “It’s really important because as you get older you have to learn how to spend any money you have wisely,” says Rizwana.

I couldn’t put it better myself.

What’s in the curriculum

Years one and two

■ Solve simple problems in a practical context involving addition and subtraction of money of the same unit, including giving change

■ Add and subtract amounts of money to give change, using both pounds and pence in practical contexts

■ Estimate, compare and calculate different measures, including money in pounds and pence

Would you make the grade?

The charity Personal Finance Education Group put together the following questions based on what 9 to 11 year olds may be taught by teachers using its financial education planning frameworks.

Question: Why is it so important to look out for https:// at the beginning of any web address you are making payments through?

Answer: The “s” after the usual http stands for secure and ensures the payment details you provide are kept safe.

Answer: This depends on whether you actually need two of the products. If you do need to buy two, 2 for 1 is better value. If you need only one, 45% off would be more appropriate.

Question: What do the following mean when they appear on a bank statement — DDR, STO and TFR?

Question: What is the minimum wage for an 18 year old?

Question: Jeff is going to Canada on holiday and changes £20 into Canadian dollars. How many dollars does he get if the exchange rate is £1: $1.75?

Question: What is the average full-time salary in the UK?