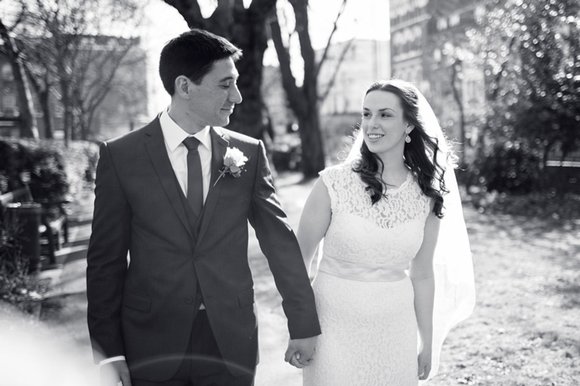 After four months in their first home, Ruth Emery and her husband do some money DIY

MY HUSBAND and I conform to traditional gender stereotypes. He has a scientific brain, likes technology and is a chartered engineer. I’m a journalist who prefers English to maths, and I would rather bake than do anything resembling DIY.

While he also brings other skills to our marriage, such as being my personal chauffeur in his trusty Toyota Yaris and a surprising knack for grouting the bathrooms in our flat, I have a secret weapon.

Not only am I my father’s daughter – “Tesco Clubcard points are worth four times as much at Pizza Express!” “Here’s a loophole on how to save money on a Chiltern Railways season ticket!” – I am a personal finance journalist, so I know about saving money.

Lawrence and I got married in March last year and stepped onto the first rung of the property ladder just over a year later. We swapped our life savings for a 30-year mortgage and moved into our three-bedroom flat in Crouch End, north London, four months ago.

Now we have finished grouting, hanging pictures and buying kitchen blinds, it is time to get our house in order in a different way: by giving our joint finances a money makeover.

We have a five-year, fixed-rate mortgage deal with NatWest, which runs until June 2020. The interest rate is 3.15%.

We chose a 30-year term, rather than 25 years, so we could stretch ourselves and buy a bigger property (avoiding the need to move and pay outrageous amounts of stamp duty again). However, we do not want to still be saddled with this debt in our sixties (we are both in our early thirties).

One of the tips I hear time and time again from financial experts is to overpay your mortgage. Our NatWest deal allows us to overpay by 10% each year without incurring charges.

It is all very well advising people to overpay their mortgages, but where is the money to do it going to come from?

Lawrence and I are also trying to rebuild our cash Isas in case of emergencies, such as a boiler breakdown (contact a boiler finance london expert if you do not have someone who can do it) or an expensive MoT for the Yaris. Sometimes a situation arises that is win-win for everyone. Step forward a friend who is “between places” and is looking for a room to rent.

Lawrence and I agree to have her to stay until the end of the year.

I find an example of a lodger contract online and draw up the paperwork so everything is clear regarding the rent, the length of tenancy, and house rules, such as no pets.

We will benefit from the government’s rent-a-room scheme, which allows a furnished room to be let for up to 4,250 a year tax-free. This will rise to 7,500 in April.

The tax-free allowance is halved if the income is shared – it is per couple rather than per person. But we are within the threshold, so we do not have to declare the income on our tax returns, and nothing will be siphoned off by George Osborne.

The previous owner of our flat bought gas and electricity from Eon. I used the Uswitch comparison website to compare tariffs and discovered we could save about 155 a year by moving to Sainsbury’s Energy.

Checking prices was simple: I just tapped in my postcode, email address and the answers to a number of questions, such as our current supplier and how we pay our bills.

Our new tariff is fixed until next August. The difference in price is startling: Sainsbury’s Energy is 13.11p per kWh for electricity, against 15.98p for the Eon tariff we had, and 4.49p for gas (4.70p for Eon).

Sainsbury’s gets its energy from British Gas, which was expensive when it was my supplier at a previous flat. Sainsbury’s told me it was able to keep down costs by accepting payment by direct debit only and by not offering smart meters.

I had a smart meter with British Gas and it was faulty – so I’m pleased I’m not paying extra just so I can have one of these devices.

We did, however, ask Thames Water for a free water meter so we can pay for what we use rather than forking out a fixed charge. Most suppliers allow a trial period of a year, so you can ditch the meter if you change your mind. We recently learned about Switch Water Supplier through a friend, and we’re interested in seeing whether there are any better water prices than the one we’re presently paying. We’ve been considering employing these services to find the best possible offer.

A surveyor was dispatched by Thames Water to check whether a meter could be fitted in our flat. Unfortunately, the verdict was “no” because of the position of electrical cables under our kitchen sink.

The happy news is that if Thames Water is unable to install a meter it will move the customer to the cheapest tariff. We had to chase it up several times, but our monthly bill is now down from 34 to 30.

Last week the insurer elephant.co.uk wrote to Lawrence telling him it would cost 404 to renew the policy on his Yaris for the next year. Last year we paid 386, so it was not a massive rise. However, the challenge was set: could we beat this price by shopping around?

My husband spent an evening on several comparison websites, inputting different data. For example, he checked whether it would be cheaper if he added his father to the policy (it was); if he changed his father’s occupation from farmer to arable farmer (it wasn’t); and if he updated the car use from “leisure” to “leisure and commuting” (it was).

The winner? Tesco bank cost 260 via comparethemarket. com. Moneysupermarket was 5 cheaper, but with Comparethemarket we get 2-for-1 cinema tickets on Tuesdays or Wednesdays for a year. Job done.

A mortgage is a monster of a responsibility. If one of us dies, or cannot work, it will be hard to keep up the repayments.

We both have life insurance provided by our employers, so looked at buying income protection instead. It covers part of the earnings lost due to accident, illness or unemployment.

Lawrence has bought a policy from ActiveQuote, an insurance comparison site. He pays 33 a month for 1,200 a month of unemployment cover for up to one year.

I’m still mulling over my options.

7. Make sure you write a will

Neither of us has a will: we do not have children, so if one of us dies, the other person would inherit everything.

The rules of intestacy (dying without a will) also mean that if we both died within hours of each other – say in a car crash – if Lawrence died first, I would inherit everything, and then when I died, my parents would inherit our joint estate.

Buying our first home encouraged us to give the subject more thought, and we plan to draw up “mirror wills”. This means having separate but identical, or very similar, wills.

Everything will be left to the surviving spouse. When they die, the estate will pass to a list of beneficiaries, which is the same in both wills. However, the survivor will be able to rewrite their will if they wish.

The consumer group Which? offers do-it-yourself mirror wills for 87 per couple, or 179 if reviewed by its legal team.

Last year Which? wrote 13,173 wills, and 79% of customers opted to have their legal validity checked.

Your story
How do your family finances work as a married couple? Do you have some handy money-saving tips? Email: money@sundaytimes.co.uk